Written by Daniel Sternegard
Updated over a week ago

Customers want to be able to ensure Planhat doesn’t sync emails to a specific end user address, if sent by a specific user. For example, a CEO emailing the decision maker at a large account, or if a user’s accounting firm is also a customer and emails between CFO and Auditor should be excluded from synching into customer conversations.

Planhat user or group of Planhat users and one or several end user(s). All to be selected from a defined list of available users and end user objects. The input selects the email address (and not the end user), meaning a shared email address will cover out all associated end users (e.g., in the case of support@planhat.com)

Email is not synchronized if the user and at least one of the end users stop-listed are on the participation list of an email. It doesn’t matter if there are other end users or users in the same email - since that stop-listed person is blocked, the entire email will not be synchronized into Planhat. Emails can still be sent from Planhat to stop-listed users, but they won’t synchronize back from the “Sent” folder, i.e., not appear in conversations.

These emails can be back-synched for specific users by admins, up to a year back.

Stop-listing could lead to some complications that are important to be aware of.

For example, in the case of adding a combination of stop-listed users and end users - e.g., to cc on an email - that will (probably unintentionally) stop synchronization from Planhat. A real world example could be if ceo@UserCo.com and ceo@End-userCo.com are stop-listed, but then UserCo and End-userCo have a large workshop with 15 people, including the CEOs, and UserCo CSM had as an action to send over all the documentation afterwards, and is using Planhat email to send. The email will be sent out (because Planhat doesn’t block send-outs with stop-listed pairs), but it will not synch back to Planhat (technically, the sent email will stay for 15 days, then disappear, if sent from Planhat), and assuming the End-userCo CEO hits reply-all to return important signed-off documentation, that reply won’t be synchronized into Planhat either. Another complication is if a user that has been stop-listed quits, because that persons’ emails with stop-listed end users won’t be findable in Planhat (although they will be recoverable in the native email client, and can be specifically back-synched by admins).

The reason for the relatively “strict” interpretation of the participant filter is to minimize risk of sensitive information leaking. For example, if CEO + CEO are stop-listed and then CEO+CEO+Legal are emailing, that would still likely be sensitive and thus be filtered out.

In general, the concrete “risk” of the new setting is Planhat not synchronizing in important conversations, but these will always be available in the native email client, thus “only” affecting team transparency while providing a robust filter on sensitive email conversations. 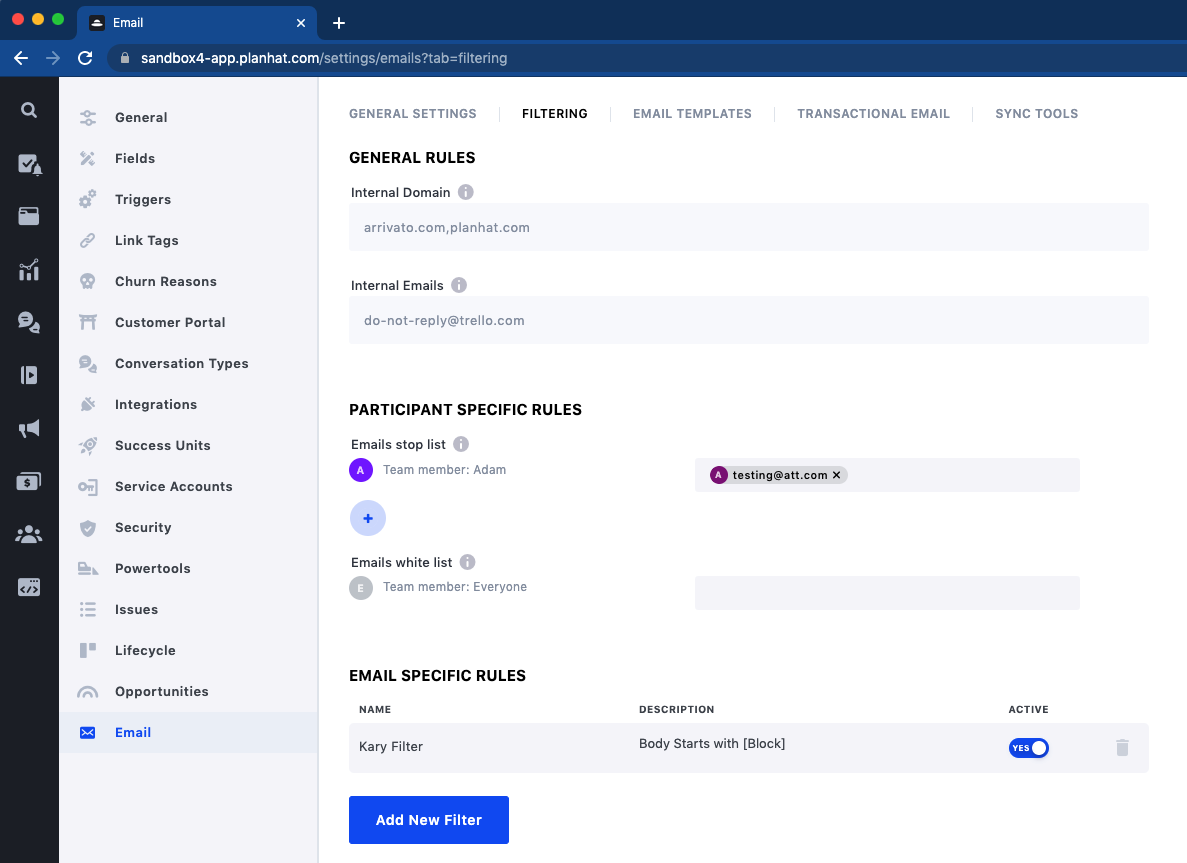 Same input logic as for the emails stop list - Planhat user or group of Planhat users and one or several end user(s). All to be selected from a defined list of available users and end user objects.

If a user exists in white-list, it will be synchronized only if the email object contains the listed end users, all other emails are ignored.